If you dislike readjusting your pin every time your game moves to a different yardage, then a multi-pin bow sight might be a good choice for you. But don’t just grab the first sight you spot in your archery store. There are many considerations to make and many brands to choose from.

I have tried different sights in the past, and today I’ll help you choose the best multi pin bow sight for you, based on your budget and preferences.

**Below, you find more detailed reviews but you can also click links above to see current prices and read customer's reviews on Amazon.

Things to Consider Before Buying a Multi pin Bow Sight

Before deciding on a bow sight, it’s good to first know how many pins you want to use.If you plan to shoot between 20 to 40 yards, a 3 pin sight should suffice. If you’re looking at a shooting range of 20 to 60 yards, then you might want to use a 5 pin sight instead. For very long-range shootings of up to 80 yards or more, investing on a 7 pin sight might be a good thing.

If you need help deciding how many pins to use, check out the “How Many Pins Should You Use?” section in my How to Choose the Best Bow Sight to Fit Your Hunting Style article. For more information on choosing a good bow sight, go to the “What’s a Good Bow Sight for Hunting” section. 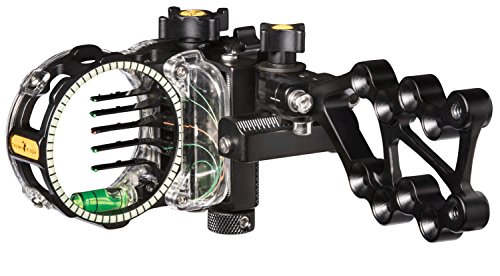 Trophy Ridge has made many innovations but its React Technology is one of my favorites. This feature, which is available in the React Pro 5, cuts the time in adjusting your pin yardages. All you need to do is set your first two distances, and the remaining three pins will automatically adjust to their assigned yards.

This bow sight also features a clear fiber housing, which I think is beneficial in two ways. First, it protects the fiber from outside elements that might cause damage to it. Second, the clear housing adds extra visibility to the sight, especially in low-light settings.

While other sights may include adjustments for the first and second axes, the React Pro also has an adjustment for the third axis, which might help increase your accuracy, especially over long distances. 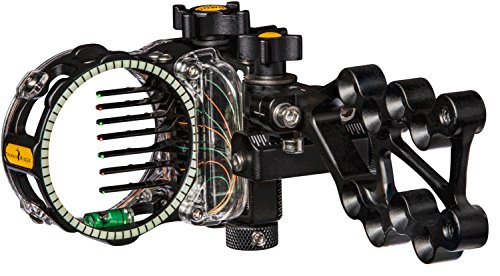 Like other Trophy Ridge React models, the React Pro 7 Bow Sight boasts of the mathematical precision made possible by the React Technology. I find this is a very welcome feature for 7-pin sights because this saves me the time to manually adjust each of my pins before going on a hunt.

Similar to other Trophy Ridge products, the React Pro 7 has tool-less micro windage and elevation adjustments, so you won’t need an Allen wrench every time you need to make corrections to your settings.

My main issue with this sight is that the bolts have the tendency to become loose after several shots. This may become problematic when you’re out in the hunting area and you have to pause and retighten your bolts again in order to make a clean shot of your game. 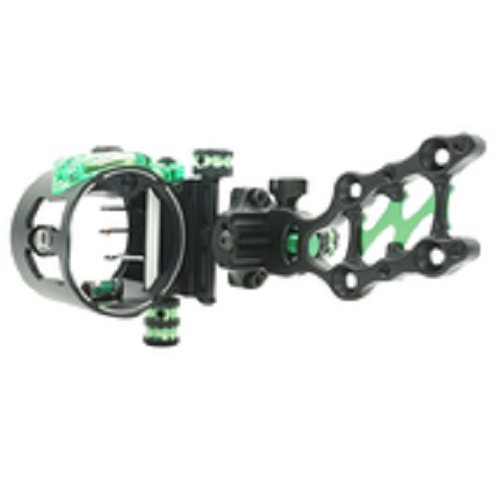 I find the Field Logic-IQ Pro Hunter Bow Sight a bit of a deviant from the usual multi-pin bow sight but in a good way. For one, it features two fixed pins and one moveable pin, so you have two pins you can use for your usual shots, and one pin you can adjust for longer game distances.

This bow sight also uses the Retina Lock Technology, which I think is a good way to improve your accuracy. All you need to do is make sure that the black dot in the lock is fully centered and you can be sure that your bow is correctly aligned with your sight line.

One slight issue I have is with the sight’s fiber optics. I find the fiber quite lacking and fails to produce as much pin light as I want. Also, this bow sight is pretty expensive, so you need to be ready and willing to invest a lot for this accessory. 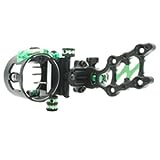 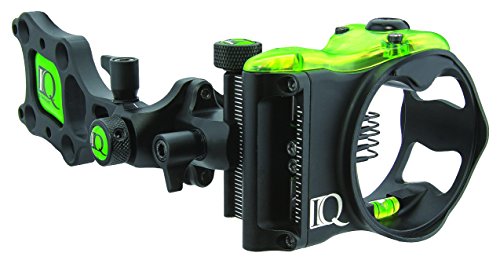 Like its 3-pin version, the Field Logic IQ 5 Pin Sight also features the Retina Lock Technology, which may help improve your accuracy. You will immediately know if something is off because the black dot moves away from the center of the lock.

Aside from this feature, this model does not require any tools for windage and elevation adjustments. No need to bring a wrench or screwdriver during your hunt, which gives you more time to aim at your game. However, you still need your Allen wrench to adjust the pins, but you can do this before the actual hunt.

Speaking of pins, this model has five bright pins that are visible during the day. Sadly, they are not that visible during nighttime, so you may want to supplement them with a rheostat light. Still, I think the Field Logic IQ 5 is a decently priced bow sight that is worth checking out. 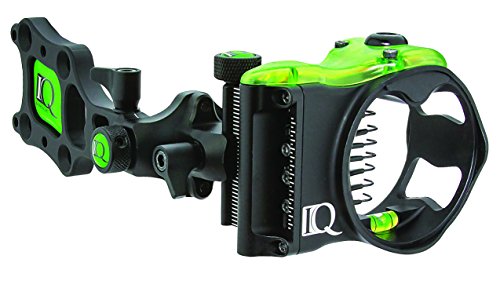 The Field Logic IQ 7 Pin Sight is not as expensive as other 7-pin bow sights, and it also improves your accuracy through its Retina Lock Technology. Not only does it help you focus, it also warns you if there is a problem with your stance or the bow itself.

A sight level is built in to improve your accuracy, especially for long-distance shooting. You can also easily adjust the 2nd axis. Using the sight level and 2nd axis together, you can check if your bow is vertically aligned or not and make adjustments accordingly.

Like its 3-pin and 5-pin counterparts, Field Logic IQ’s 7’s pins are not very visible in dark surroundings, so you may want to invest in an additional light. I also find that the Retina Lock is a bit big, especially when you use a peep sight with it. 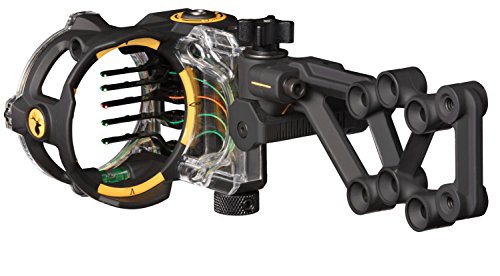 Rounding up the lineup for Trophy Ridge 5-pin bow sights is the React 5 Pin Bow Sight. While this original version is heavier than the React Pro 5, it still features most of the things that make the React Pro a great bow sight.

Like the React Pro, this model uses the React Technology to automatically adjust the pins in the sight. This model also has a rheostat light for additional visibility, but even without using this, you might find that the pins are already bright even in low light.

It might be a bit tricky to set it up at first though, and the fact that the package does not come with an instruction manual doesn’t help either. However, this version is cheaper than the Pro model, so you might opt to purchase this if you want to save a bit of money. 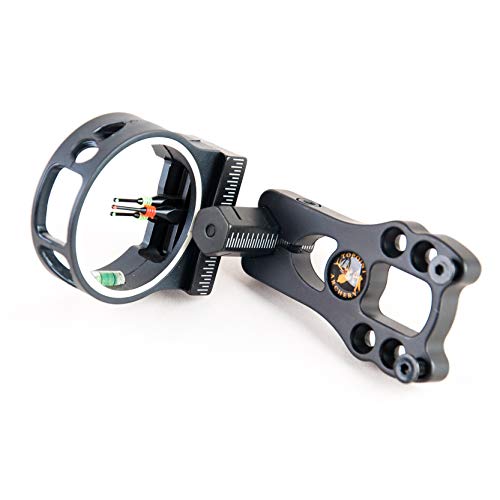 If you’re a beginner hunter looking for a cheap but effective multi-pin sight, then Great Deals LLC’s 3-pin bow sight might be a good choice for you.

This bow sight is made of high-strength 6061-T6 aluminum alloy, which I think is good enough for the price you’re paying. I also found that this sight is easy to use, with none of those complicated knobs and levels that might confuse a beginner hunter.

However, because this is a very cheap model, some of its functions might not be at par with the more expensive brands out there. For instance, the pins, while bright enough for daylight hunts, are hard to see in low light. The fiber is also a bit short so it can’t store as much light as you might need during your hunt.

Still, I think the Great Deals LLC 3 Pin Bow Sight is a good practice sight that might help improve your aim before you invest in more expensive brands. 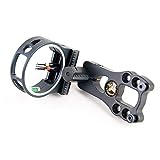 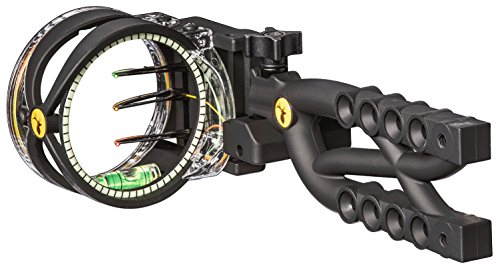 I’ve come to trust Trophy Ridge products for good reason. For example, its Cypher 3 Bow Sight is a nifty bow accessory that is easy to use. You don’t even have to shell out a lot of money for it.

The Cypher 3 features three super bright .019” pins which are visible even in low-light surroundings. The fiber housing is clear, too, which is good because it adds extra visibility to your sight.

This Trophy Ridge model also features the Ballistix CoPolymer System, which claims to reduce vibrations to the sight and allows you to shoot more accurately. This also gives the sight a slightly rubbery texture, which is soft and smooth at the same time.

However, I’m not very impressed with the rubber system and I didn’t really notice any significant improvements on the vibration levels. Still, I find this sight effective if only because its pins remain visible even in dark hunting environments. 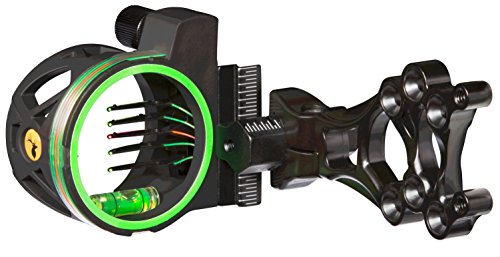 The first of Trophy Ridge’s models in this category is the least expensive, too. The Volt 5 Pin Bow Sight is a cheap 5-pin sight that is suitable for both right-handed and left-handed bow hunters. But don’t let the price worry you—like other Trophy Ridge products, I find that this model is worth the money you spend on it.

First off, it features five extra bright .019” horizontal pins with durable fiber, which makes them visible even in low light. It also features a green hood accent, which could help you have a quicker sight acquisition. Also, at 0.6 pounds, this sight is very lightweight and adds little to the total mass of the bow.

The Volt 5 is also made with Ballistix coating, which Trophy Ridge says reduces vibrations to the bow. Again, I haven’t really noticed any big difference on the amount of vibration even with this material, but don’t let this turn you off from checking out this model. 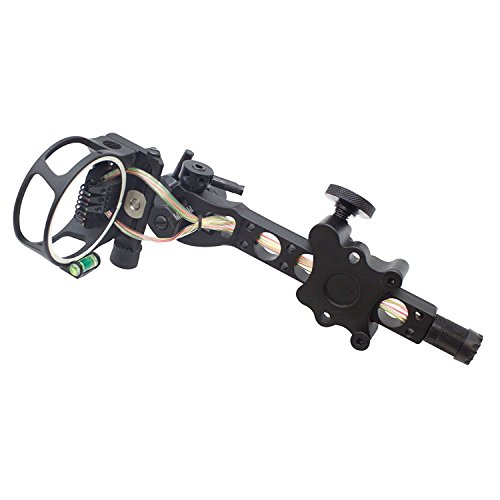 Some hunters do not like using 7-pin sights because they find the view too cluttered to make a good shot. Fortunately, the Southland Archery Supply 7-pin bow sight has a 2” diameter housing, which gives you a larger view.

This model also features seven .019” pins that you can remove and replace with other pin sizes, depending on your preferences. You can even remove one or two pins if you do not want to use all seven.

I also like that this model has tool-less adjustment settings, so it’s easier to use. You can easily attach or remove the sight from the riser just by turning a knob on the detachable reversible bracket.

The SAS 7-pin bow sight comes with a blue LED light to help with visibility. However, I find that it does not really contribute much, so you may want to consider buying a separate light if you plan to hunt in very dark environments. 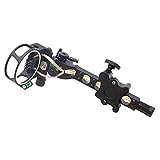 Before you decide on the brand and model, it is best if you know how beforehand many pins you want for your bow sight. To do this, you may want to determine how many yards you want to shoot and what lighting conditions your hunting grounds will have.

Choosing the right multi pin bow sight is crucial to the success of your hunt. Considerations such as the hunting environment, extra features, and price range may help you decide which sight is best for you.

Amazon and the Amazon logo are trademarks of Amazon.com, Inc, or its affiliates.

Hey there, I’m Jennifer, a mother of two sons, and I really enjoy the outdoor world. I take advantage of my spare time to hunt deer with a bow. I founded BuckWithBow blog so that I can share my hunting experiences in the woods and thus help you discover a couple of tricks, tips and essential skills that will make you a successful bow hunter.

BuckWithBow.com is a participant in the Amazon Services LLC Associates Program, an affiliate advertising program designed to provide a means for sites to earn advertising fees by advertising and linking to Amazon.com. Additionally, BuckWithBow.com participates in various other affiliate programs, and we sometimes get a commission through purchases made through our links.